A pencil sketch of  a medieval type soldier Richard the third  era maybe?

A church painted aldactone with lots of artistic licence , the challenge was to paint something spooky.  Oil pastels once more.

More from WDE…. first  a couple of rough sketches… there were three separate ref pics of dogs, after sketching two of them I decided to combine all three into a digital painting, all were done freehand.

The combined digital painting of the three dogs, no photo manipulation… painted in Painter X using the charcoal and pastel tools plus blenders with some textures added for the background.

The Weekend Drawing Event at Wet Canvas is such good fun, a way to have a go at things you would normally not consider, well for me anyway and it’s good practice. There is usually a good choice of ref pics from easy to sometimes really difficult and sometimes a challenge is thrown in as an extra which can add to the fun bit.

You have two hours to do a sketch or painting and then post in the forum, then it’s up to you whether you take it further, I usually do as I  really don’t like leaving work unfinished.

I painted the grapes below whilst sat in the garden on a beautifully sunny day.  Water colours this time which I haven’t attempted for a long time.

The hats were done with water soluble oil pastels, the challenge was to emulate the artist Marc Franz, this was my attempt, very abstract for me  ……I really enjoyed this one found it quite relaxing to paint in a different style.

What a wonderful day it’s been ~~ the Royal Wedding of course of Prince William and Kate Middleton.
I thought the whole ceremony was so lovely , her dress elegantly simple and they look so happy together, of course all sealed with a loving kiss.
Let’s hope the media leave these two young people alone to develop their lives without being followed every step of the way.

WDE  stands for Weekend Drawing Event, held each week at Wet Canvas, below are three paintings that I’ve done over the last two weeks.

A quick sketch done for WDE, this time charcoal and conte on water-colour paper, time taken about 1.1/4 hours.

This was done as a challenge for the WDE at Wet Canvas. A really good excercise in tonal values.
All done in Painter X using Wacom Intuous 4 pen, tools used were pencil and chalk plus a blender.
I’m very pleased with the final outcome.

This is Keeta with her Easter hat on two hours work done with oil pastels.

Since my last post things have been rather hectic. Deviant Art is such a busy community with stunning artwork of such diversity that I can easily spend hours there and very often do, then find that I’m not spending enough time on my own artwork. However it is inspiring to see other’s work and has given me a boost to produce some good work this year so far.

My interest in fractals still remains strong, even though most of the time what I produce are happy incidents, I cannot claim to fully understand Apophysis, but do enjoy whiling away a few hours to produce something beautiful and creative. Here are a few more that I have created.

I love the Autumn colours in this one.

Well it does look a bit like geese to me, the border was added in Paint Shop Pro.

These last two are rather nice for Valentines Day.

Posted in Apophysis Fractals | Comments Off on More Fractals

After having a very long break from art of any kind, I’m now back in the flow.  I have in the last six months discovered Fractals, these are digitally created images using a software fractal generator called Apophysis.  I have been totally immersed in this programme, which by the way is absolutely free to download.  It has utterly bewitched me, although I don’t claim to understand the programme it has and does give me hours of creative and also more often than not, frustrating artistic fun. The frustration comes from not fully understanding what I’m doing I suppose as it’s all a bit mathematical, but you don’t have to be an expert at maths to create something worthwhile, also there are lots of tutorials out there to help you along. I just play about with these little triangles called transforms and add different variations until I produce something pleasingly artistic.

Here are some recent examples of my work using Apophysis, all are raw fractals, by that  I mean that each one is started with a new blank flame, all my own work.

This first one I have called Victoriana, which I think is self descriptive.

This second one …. Moonlight Becomes You…. I’m particularly fond of,  it took a lot of tweaking to get this image the way I wanted it to look but well worth the effort.

As for Floral Fantasy, I was really overjoyed with, I think I spent more time on getting the right gradient for this to work so well than creating the actual fractal, once again it was well worth the time and effort spent. 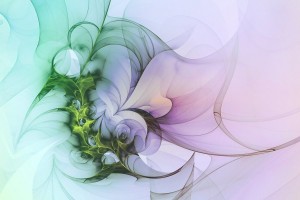 The following two fractals were done over the Christmas period, I was very pleased at how these turned out especially O Tannenbaum, as I specifically set out to produce a fir tree, you can imagine my delight when I did, I then added some snow using Corel Painter X.

You can see more of my work at:- link

This is my latest piece which is currently listed on Ebay, it’s 6.” x 8″ painted using soft pastels and pastel pencils on Fisher400 pastel paper. Fisher400 paper is a new paper on the market and it really is a remarkable paper, it can be used with any media it seems, I’ve tried acrylics, water colours, soft pastels and oil pastels on this paper, it’s sturdy and takes loads of layers without using fixative, you can even wash off the pastel under a tap without losing the tooth of the paper.

I also have another ACEO card for sale, this one has been painted with acrylics.

I have a couple of ideas whirling about in my head for my next paintings, deciding which to do first is an issue at the moment.

My thoughts on painting a lamb became a reality and this is the sixth painting in a week, I’m really enjoying working with pastels again but wonder if the public like pastel ACEO’s, time will tell whether I stick to pastels for a while or revert back to acrylics.

This is in my opinion a lovely cheerful painting for Easter.

Posted in Traditional Art | Comments Off on Easter Lamb

The first one is of a white West Highland Terrier (I used pastels again for this little fellow), they seem to be very popular as pets at least three of my neighbours have them.

The second is of a little Shih-Tzu dog called Lucy, resting on a cosy cushion 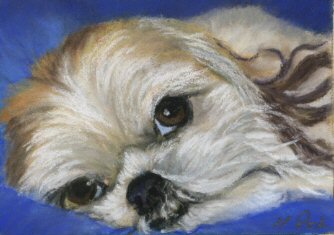 and lastly another cutie, this is Charlie a King Charles Cavalier puppy:

As it’s Easter I’m thinking of painting a lamb, it’s just that at the moment, a thought.

Posted in Traditional Art | Comments Off on More ACEO’s